Greater Cause is the 54th chapter Ajin: Demi-Human, created by Gamon Sakurai.

The SDF has become a battleground. Sato is runing amok, killing any group of soldiers that get in his way. The new leader of the latest wave of soldiers tells his subordinates to shoot without fear of friendly fire casualties. He says that they are soldiers fighting for the public good, and therefore must be willing to die for such a cause.

Sato meanwhile has cut off a soldiers finger in order to open a security door. Inside is an SDF armory full of military grade guns, ammo, grenades, etc.

"To think that none of those have ever seen action," Sato says to himself. 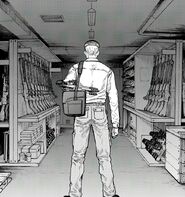 The leader of the soldiers hunting Sato at the SDF

The leader gives his troops a pep talk

Community content is available under CC-BY-SA unless otherwise noted.
Advertisement